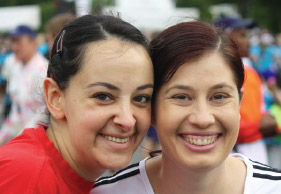 Running, I think, is a little bit like childbirth. Before the experience, you dread it, going through everything that could possibly go wrong. During, you start off with a wealth of optimism that is quickly replaced by huffi ng, puffi ng and a desperate desire for the whole experience to end. When it’s all over, you feel pretty pleased with the outcome and a certain, very well-engineered part of your brain causes you to forget how difficult it really was, ensuring that you will do it again.

Since I have never actually had children, I hope you will forgive my na?ve and rather adolescent comparison, but it seems to me to be the only way to keep doing what runners do: enduring the pain, pushing beyond our boundaries, and then getting up the next morning and doing it all again.

At the start of the month, I was walking (and running a little) with newfound confi dence. I had become ‘one of the running crowd.’ I was feeling pretty proud, considering I hadn’t really been sure I could pull this whole running thing off. I found myself seeking out other runners, talking about running, running equipment and running injuries all the time, and even dreaming about running.

So, I suppose I shouldn’t have been surprised when I got my first running ‘injury.’ On my runs and walks, my left foot had begun to pronate and I was spending an hour of my morning walks correcting my gait, pushing my foot to the outside, trying to counter the pronation effect, getting no relief and a rather sore ankle. Visions of a trip to the podiatrist loomed large in my future. I imagined all kinds of podiatric torture, from Chinese foot binding to bone cracking realignment, even to a simple, “Sorry, nothing we can do for you.” The real experience, of course, was much more pleasant.

I went to see Franklin Dubowitz, a recommended podiatrist who, I’d been told, could make orthotics for me on the spot. Being a rather impatient person, this seemed like the perfect solution for me. Franklin’s talkative nature and calm manner reassured me and he explained that, although I was only feeling it on the left, I was actually pronating on both feet. Within an hour – and without the strange torture techniques I had imagined – I had a pair of orthotics.

BLISTER IN THE SUN
Now, I must stress that Franklin did warn me that my feet would need some time to get used to the orthotics, and that I should keep to short distances until they did. But, being a know-it-all, I did the Spar Ladies’ Challenge 10km within three days of getting the orthotics – and ended up with some of the  biggest blisters in the history of human existence under my arches.

A lesson, I fi nd, is always learned in hindsight, and it was without the benefit of this knowledge that I lined up, with my friend and fellow Modern Athlete, Michelle Peake, at the start of the Spar Ladies’ Race. Michelle and I had set our target time at 1:20 to complete the race. We would have to keep our pace at 8min/km, which I knew would be a push for me, but I was willing to try.

The day dawned windy and gloomy, not a good combination for either running or high spirits. There isn’t much to say about the race besides, well, we put one foot in front of the other, repetitively, for over an hour. The wind and the hills of Randburg worked against us, and about 1km from the fi nish, we needed
a distraction to take our minds off the pain and weariness. So I told jokes. For ten minutes, I regaled Michelle with every dirty joke I knew. I put on a variety of accents, from a Russian vodka merchant to an Afrikaans truck driver, anything to make the race end. We didn’t make our target. At 1:28, Michelle and I ended the race a little disappointed, a little tired, but wiser.

TRIAL TIME
Determined to improve my time, I was quickly roped in when I heard about the Inter Club Time Trial Challenge. Four clubs, Jeppe Quondam, Fit 2000, Rand Road Warriors-Edenvale and Bedfordview participate in this time trial once a month and I was eager to ‘be one of the crowd’ and prove that I belonged in this world of athletes. I set myself a goal time of 40 minutes for 5km and was determined to push myself harder this time than ever before.

A time trial, I have found, is similar to eating dark chocolate. The bitterness is an undercurrent that hits at the fi rst bite, and then lingers until the last dark smudge has been wiped away. The sweetness, though less noticeable, is a reward for getting through the bitterness. My bitterness came about two-thirds through the time trial, when I began to realise that there was no one behind me. I was last… (OK, I wasn’t, but it felt that way at the time.) The sweetness? My time was 40:18. I had exceeded my goal by only 18 seconds. I had taken my time down to 8min/km. Sometimes you don’t know how well you’re doing until you really know.

BLOOD, SWEAT AND…
My month of running really has been full of experiences, and there are two more that are worth mentioning. The first took place on a Sunday afternoon, when I decided to go to the gym and do some running on my own. Imagine my surprise after five  minutes of solid running on the treadmill when I had not even broken a sweat. I do, of course, understand that running on the treadmill is easier than running on the road, but on my last turn of the treadmill, I had only managed to run in six-minute spurts, walking in between. This time, I kept going until I had run for a full 13 minutes.

Notable mention number two occurred on the day I decided to try running with the club’s D school. I was very nervous, especially considering my dismal prior performance. Although I did lag behind a bit, I fi nished the route only a few minutes behind the rest. The last 2km were the hardest, as I had a nagging blister at the back of my heel that was really beginning to sting. When I got home, I realised that the nagging blister had been rubbed raw and my shoe was full of blood.

Now, being a very opinionated person, I had always been sure that there is no one on the planet who can ignore pain to the point of bleeding. When I heard stories of Comrades runners whose feet had begun to bleed, and yet they marched on, I always smirked inwardly, thinking, really? How can you possibly ignore pain like that? My question had been answered. Sometimes, the run is more important than the pain. And, on the positive side of the pain scale, I know now I really am an athlete; now that I can boast about my fi rst bleeding blister!

This month has taught me a lot about running and a lot about people, myself included. I learnt that we can push through our pain if the prize is worth it. I learnt to listen to and take care of my body. I learnt that without the encouragement of others, being a true and dedicated athlete is almost impossible.