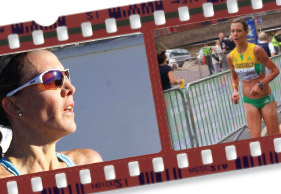 The South African women’s team at the recent IAAF World Half Marathon Championships in Birmingham, England, finished in an impressive sixth place, and all three team members smashed their personal best times. Here, South African half marathon champion, Annerien van Schalkwyk, tells of her experience at the World Champs.

Teamwork and determination were the secret of our success in Birmingham. I was fortunate to be part of a talented team including Ren? Kalmer and Poppy Mlambo. The three of us learnt to work together as a team and for the first time in the history of the World Champs, a South African women’s team placed sixth in the team category. Another highlight was that each one of us ran a personal best time. We could not have asked for more!

I had to deal with a few disappointments before the World Champs, but it made me realise that nothing was in my hands. While competing at the Northern Gauteng Cross Country Championships earlier this year, I broke my little toe when I bumped into a fellow competitor. While recovering, I was very emotional and disappointed, but I also realised that my running career was in God’s hands and not in mine.

When I placed third at the South African Cross Country Championships four weeks after my injury, I had a feeling that things would go well at the World Half Marathon Champs.

Dan Muchoki, a Kenyan coach, played a huge role in our preparation while training at the University of Pretoria’s High Performance Centre. Some days, the training felt like hell, but it was necessary if we were to be successful at an international level.

PERFECT RUNNING CONDITIONS
We could not have asked for a better race day (11 October). Though it rained lightly at the start, it was perfect weather to run in. The pace was very fast from the onset and I realised that in the future, I would have to concentrate more on speed if I wanted to make any impact on international races.

We made a difference at the World Half Marathon Champs and from here on, we can only improve and hopefully make our mark at the African Championships and Commonwealth Games. I would love to qualify for both races. I am grateful to Dion Saayman who helps me with my training. My ultimate
goal is the Olympic Games in 2012. It sounds like a dream, but I believe that with hard work, support from my loved ones and the grace of God, it is a dream that can come true.

I strongly believe in the following words: To accomplish great things, you must not only train, but also dream; not only plan, but also believe.