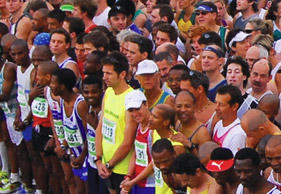 The October 2009 OUTsurance 94.5 Kfm Gun Run Half Marathon, 10km and 5km in Cape Town broke all records for entries, proving once again that running and walking in South Africa are booming

When all the entries for this year’s Gun Run had been tallied up, the organisers had a total of 9 901 entrants across the three distances of Cape Town’s secondbiggest road running event. Only the Two Oceans is bigger. Last year, the combined event attracted 7 905 entries, which means it grew by just over 25% this year. While the half marathon was up 10%, attracting 3 161 entries, the biggest growth was in the 10km, which grew by 42% to bring in 4 633 entries. The 5km fun run had 2 107 entries.

One of the race organisers, Kevin Lodge of Top Events, was understandably excited about this tremendous growth and puts it down to the fact that more people want to exercise and stay healthy, and more walkers are joining events like this. “We also had a more participantfriendly venue on the beachfront this year, and a more scenic new route that took in the Waterfront and Camps Bay, with scenic elevated views that made it even more enjoyable. Also, the radio campaign run by 94.5 Kfm was awesome – that’s a powerful machine!” said Kevin.

Added to that, there was a R10 000 lucky draw prize up for grabs after the race, and the winner was Sophia Fourie, who was standing virtually in the front row at the prizegiving and didn’t have to walk far to claim her windfall. Also receiving much needed funds was the offi cial race charity, The Homestead
Projects for Street Children, which cashed a cheque for R20 000 made up of donations from the Gun Runners.

While the Gun Run is no longer run midmorning with a cutoff time that coincides with the fi ring of the Noon Gun on Signal Hill, the race still features a booming cannon. A very loud 88mm Cape Artillery field gun is brought to the start and fi nish areas to signal the beginning and end of the threehour event. This year, the starting shot was fi red by Western Cape Premier, Helen Zille.