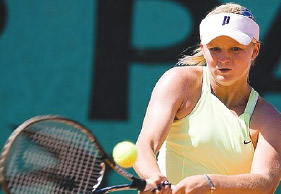 Chanel Simmonds, 16, is South Africa’s top junior tennis player. She uses running to increase her fi tness level and to help her focus in her chosen sport. Having started her tennis career at the age of six, Chanel slowly worked her way up the South African Junior Tennis rankings. She is currently South Africa’s number one ranked girl under 18. She has been the National Champion twice and was chosen to represent South Africa in the senior and junior Fed Cup Teams, as well as winning Junior ITFs held around the world, which attract many of the top international juniors. Although Chanel has only played in three senior events, she already has a world ranking on the WTA Circuit.

Simmonds is sponsored by Prince and is currently the 14th ranked girl in the World Junior Tennis ranking. She explains that it is running and working constantly on her fi tness, as well as practicing hard, that have given her the edge to attain her current level of tennis. Under the guidance of her experienced coach, Earl Grainger, Chanel has taken her training to the next level by including road running and speed work in her training routine, thus increasing her fi tness, leg strength and acceleration. The basis of tennis is a combination of physical and mental fi tness. For Chanel, running between 5-8km daily has helped improve her stamina. Various types of sprinting exercises, such as line sprints and fi eld sprinting, have helped increase her movement ability on the court. Another part of Chanel’s fi tness regime is strength training, which she incorporates by doing short bursts, running with a tyre strapped to her waist. At 16,
she is extremely focused and needs to be to hold her world ranking, Chanel is adamant that she never wants to lose a  match due to lack of fi tness, strength or stamina so you will defi nitely see her on the road.

Chanel was also crowned African Junior Champion in Morocco in March 2009, an event in which top players from all the African countries participate. The highlight of her career this year was the reaching quarterfinals at the French Open Junior. She is no stranger to the grand slams, having also competed in the US Open and Australian Open Junior events. She is also currently participating in Junior Championship at Wimbledon. Her coach, Earl, agrees that it is Chanel’s physical presence and fi tness that have played a major role in her achievements to date and he is expecting big things from her. These events will give her invaluable experience for the future. Chanel is part of the highly-rated Earl Grainger’s Tennis Academy based in Bedfordview. Grainger has twenty years of international coaching experience and has coached many top players. The Academy has a full day function and students are home schooled to give them the time they need to focus on achieving the best results possible in their chosen sport.

It has been a long time since South Africa produced a world class ladies tennis player and Modern Athlete wishes Chanel everything of the best in her quest. Hopefully, we will see her on the road at a few short distance events.