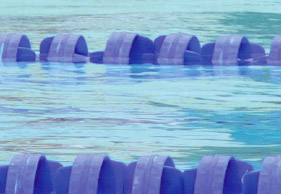 Competitive swimming requires a high level of fi tness and cardiovascular ability. When you swim, you get a full body workout which tones all of your muscles and defi nitely works your fi tness. One thing all swimmers swear by is that one needs to cross train in order to make additional gains in the sport of swimming. And this is where running features. Running is an excellent cross training option as swimming and running compliment each other in so many ways. Running burns calories fast, improves bone density, builds strength and makes you fast when you do the right track training – all advantages to swimmers who need to be lean and strong with low body fat.

Pretoria-born Cameron van der Burgh recently made South Africa proud by becoming our very own world champion in the 50m breaststroke at the FINA swimming World Championships held in July in Rome. He fi nished in 26.74 seconds – smashing the previous record of 26.89 set by Brazil’s Felipe Franca da Silva. Cameron, the youngest South African swimmer to hold a world record, also won a bronze medal in the 100m breaststroke at the same championships. But more amazingly, just 11 days later, he broke three world records in 24 hours in the Telkom National Short Course Championships in Pietermaritzburg. He took 0.51 seconds off his 50m breaststroke world record, fi nishing in a time of 25.43. He then stormed ahead and broke his own 100m breaststroke world record in a time of 56.39, only to better it the next day with an impressive 55.99. Not bad for a 21-year-old!

This swimming sensation says fast running sprints help him to perform at his current high level. He trains six days a week, swimming 11km a day, combining aerobic swimming in the morning with lactate and threshold work in the evening. Twice a week, he sweats it out in the gym and three times a week he does gymnastic exercises to help him improve his core strength. Once a week, on a Saturday, he does sprint running on a track. Cameron does different sets of sprints, alternating between 50m and 150m sets. When he does 150m sprints, he runs the first few a bit more slowly and builds up to his maximum speed. Alternatively, he does a set of 50m sprints at maximum speed from the word go. He believes this has helped develop his fast twitch fi bres. “I have found these sprints really helped my swimming and have given me the best reaction time off the blocks.”

He does not believe in doing distance running as short distance swimming is an aerobic exercise that requires more speed than endurance. “My race is over in less than 60 seconds and long distance running won’t help me, but sprint running certainly does. I run 100m in 10.8sec on the track. Hey, maybe
I should take up running!” says Cameron.

He trains hard every day because a swimmer can lose fitness very quickly. Cameron explains the same muscles used in running are used when walking around every day. The same cannot be said about swimming. “Swimming is so different; there is no movement on land that can compare to it. You can start losing fi tness within three days of being out of the water; it’s like lying in bed for three days and then trying to walk fast,” says Cameron.

He has never been very unfi t. “I feel better as a person when I am in shape and therefore I never let myself go. Being healthy and living a good life is what I strive for.” Apart from swimming, he enjoys watching athletics on television and from time to time he enjoys jogging, mostly for fun and always with a friend. “I enjoy the chatter amongst friends while running. It puts me at ease and it is a time where I can really speak my mind. Running makes me feel healthy. It clears the mind and lets you think about what’s going on in your hectic life,” says Cameron, who has been active all his life. As a child, he was hyperactive and was on medication to control it. He eventually took up sport as a way to channel his excess energy. He has never done any running races but would consider doing the Two Oceans Half Marathon after his retirement from swimming. “I won’t be doing Comrades though. Comrades is crazy to me, but when I watch the race on television, I think of how brave those runners are. I am amazed that people can finish such a gruelling race.”

Cameron attributes his success to his self confi dence, hard work and attention to detail. “I believe in myself and hate to lose. I live to race. Sport is my life; it’s a refl ection of what I go through. I have fun knowing that I am being true to myself.” His mother, Beverley, was the fi rst person he called after becoming the world champion. “She has always been there for me and is a great support system to me.”

His amazing achievement only sank in the morning after the race. “When I woke up and saw my gold medal, I realised it was a reality. Becoming a world champion was no longer just a dream.” And what can we still expect from South Africa’s hunky poster boy of swimming? “An Olympic Gold in 2012,” says Cameron, who lives by these wise words; “Be yourself; not what you think you should be.”