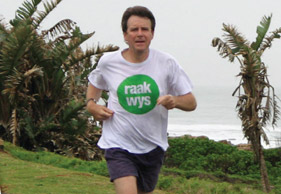 Between stressful jobs and trying to spend quality time with the family, exercise is often the first thing that falls to the bottom of our list. In a series of features on how to balance a busy career with running, Modern Athlete speaks to various high-powered professionals to find out how they manage to fit sport into their hectic schedules. This month we chat to Tim Du Plessis, editor of Beeld newspaper.

What is your background and how did you get involved in journalism?
I am a born and bred Gautenger, but spent part of my youth in the old Western Transvaal. In the summer holiday of my first year at university, I worked at Beeld as a student reporter and instantly
fell in love with journalism. After completing my studies, I joined Beeld’s full-time staff. Later, I completed an honours degree in journalism at the University of Stellenbosch. I’ve been a journalist
now for 33 years. My fi rst (very brief) editorship was at The Citizen and then at Rapport, where I stayed for nearly eight years. I’ve been the editor of Beeld since February 2009.

Who is the most interesting person you have interviewed over the years?
I interviewed Thabo Mbeki in October 1988 in an office at the Kremlin in Moscow, in the old Soviet Union. That was when the ANC was still banned in South Africa and the USSR was still a proper
communist country. The interview lasted for four hours.

Why are you so passionate about journalism?
I became a journalist in 1976 believing we have a mission to make the world a better place. I still have the same passion after all these years. We, as journalists, are supposed to stand up for the small guy, relentlessly expose injustice, hold up a mirror to society and above all, be a counter-balance to power-hungry and corrupt politicians – a species of which we have an abundance in this country.

How long have you been running?
I started running in December 1998. I never exercised before that.

What motivated you to start running?
We have a history of heart disease in our family. Once a year, I go for a cardiac evaluation and since 1981, I have been hearing the same refrain from the cardiologist: “You are fi ne, but you must get exercise.” I finally got around to it at the age of 44. I’m 55 now.

What was your very fi rst run like?
Dreadful. I nearly died, and that after only running for three minutes and walking for twenty minutes!

How do you fit running into your busy life?
A (fi t) colleague gave me a copy of Prof. Tim Noakes’ running programme for ‘couch potatoes’. It’s a 16-week schedule that combines running and walking to the point where you are fit enough to run four times a week for between 20 and 40 minutes. I modified the schedule to four 35-minute runs per week. I run in the mornings because of my work schedule – at a daily newspaper, I work until seven. It’s easy
to get up in summer, but really hard in winter. I try to be disciplined about this.

Who do you train run with?
I run alone – lots of talking takes up too much oxygen!

Have you done any road races?
No, I just run to keep fit.

What do you see as the biggest obstacle to your running?
As I get older, I can see my body taking more strain, even though I follow a moderate running schedule. All types of niggling injuries are starting to crop up. Maybe I should follow my girlfriend’s advice and start doing yoga!

How has running helped your career?
Because I have a demanding job, I really enjoy the stress relief I get from running. Sometimes, I get the impression that I have more energy than some of my colleagues who don’t exercise.

What is the best advice you have been given with regards to running?
At first, nobody told me about the importance of stretching. I picked up some injuries and went to sports physician, Dr Jon Patricios, who showed me some stretching techniques. These days, I stretch religiously.

What do you think about when you run?
I think about story ideas and articles for the paper as well as catchy lines to add to my weekly column. Sometimes I ‘write’ a full column in my head while running. And sometimes at the start of a run, I ‘file’ a problem in my head, be it personal or professional. Often, I finish the run with a solution.

Proudest moment in running or business?
I derive a lot of pride and satisfaction from being involved in the daily grind of producing a well-regarded newspaper, surrounded by talented and passionate journalists.

Most embarrassing moment in running?
No real embarrassments, but one morning at 6:12 in 7th Street in Linden, Johannesburg, a lady stopped me to ask for help with a problematic bra strap she could not reach. I obliged, she thanked me and walked away as if it was the most natural thing in the world! Imagine the paparazzi picture of a newspaper editor fumbling with a woman’s bra at dawn in the leafy suburbs of Jozi! Afterwards a friend said that she had asked me because she probably knew runners were decent people who wouldn’t
harm her.

And in business?
Every time I have to  print a retraction or a correction.

The thing I love most about running is…
That feeling of achievement and satisfaction once you catch your breath! And of course, the fact that you can run anywhere in the world.

After a morning run the fi rst thing I like to do is…
Drink two glasses of cold water.

My greatest ambition in running is…
To always keep going.

I don’t enjoy being beaten by…
Competing news outlets!

Who are your running role models?
Anyone my age who does more running than I do.

What is your favourite meal after a run?
Fresh fruit in season, muesli with honey and plain yoghurt, and a slice of brown toast with ham or cheese.

What is your favourite place to run?
The Promenade in Seapoint, Cape Town. I also enjoyed running along the Elbe River in Dresden in Germany, Hyde Park in London, the Tier Garten in Berlin, in the French countryside and in the suburbs of Accra, Ghana.

I could not go running without my…
Sweater and gloves in winter.

What would you say to someone who says that they don’t have time to exercise?
Lame excuse! If you really want to, you can always make time.

Life motto?
Be kind to yourself and to others. In that order. And always look on the bright side.