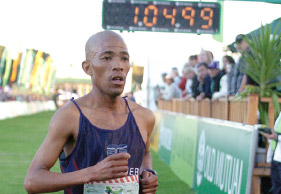 
He does not race a lot of marathons, but when he decides to put his heart into a race, he certainly does so in spectacular fashion. Not only did George Mofokeng win the recent Nedbank Cape Town City Marathon, he also clocked the fastest marathon time this year on South African soil. The two-time South African Marathon Champion won the race on 27 September in a time of 2:14:20 and walked away with a R60 000 cash prize.

George is an experienced long distance runner and won the national marathon title in 2006 and again in 2007, when he clocked his PB of 2:13:50, a time he plans to improve on in the not-too-distant future.
In fact, he is convinced he will soon run a sub-2:10 marathon.

Unfortunately, George has struggled with injuries over the last two years. His victory in Cape Town was a welcome sign that he is back on track. “I was just running according to my fi tness. I did not try and break any records, but I was very happy with my time when I finished,” says George, who works for Transnet in Pretoria.

He does not believe in racing every marathon on the calendar and chooses his races carefully. “I don’t run for money. I run to clock fast times,” says George, who only ran two marathons this year and won both. His fi rst was the Marathon International Orange in June in Mauritius, where he fi nished in a time of 2:16:06.

His training consists of a lot of quality work. He runs an hour every Monday to Friday, with quality work on Monday, Tuesday and Thursday evenings. This includes track sessions of 20 x 400m, 5 x 2000m, and a fast 8km time trial. Saturdays are rest days followed by a long training run of about two hours on Sundays. He usually runs these sessions at a pace of 3:20min/km.

“I love running. I started when I was at primary school. I used to play soccer, but when I saw the other kids running cross country, I joined in and realised I was fast,” says George, who placed tenth and earned a gold medal in the Two Oceans Half Marathon in 2006, fi nishing in a time of 1:04:48.

George’s biggest dream is to compete in the next Olympic Marathon – and his dream might just come true. ASA General Manager, Molatelo Malehopo, recently said ASA would defi nitely be inviting George to join the national performance squad in preparation for the 2012 Olympics.