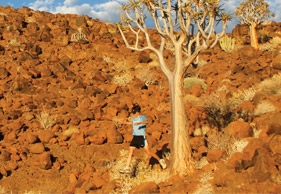 While both have their pros and cons, many cyclists choose running s a form of cross-training, giving them something different to d. And as most athletes will confess, a break in the sometimes undane routine of a chosen sport is often better than a holiday! One such cyclist who thrives on cross-training and incorporates regular running into her fi tness regime is Hanlie Booyens, women’s winner of the gruelling 2009 Cape Epic.

This tough, challenging race is one of the biggest mountain bike races in the world. Imagine eight days spent riding through 800km of unspoilt Western Cape nature, including climbing various mountain passes. There is no doubt that you have to be fi t for this event. And there, Hanlie has no problems whatsoever: she won the 2008 Totalsports Challenge, a tough multi-sport event that comprises seven disciplines – road running, trail running, road biking, mountain biking, swimming, sea paddling and freshwater canoeing. She was third in the 2009 Totalsports Challenge and placed second in the 2009 Southern Storm Duathlon.

THE START OF GREAT THINGS
An indoor hockey injury forced Hanlie to start cycling, and she loved it so much she never stopped. “Though most people think I ride my bike all day, I actually do have a full time job. I am an architect and
love my job. After working at a big fi rm for eight years, a partner and I started our own fi rm in 2007. I am a believer in the motto, ‘The more you do, the more you can.’ Fitting my training into my
busy schedule just takes effective time management… and a very understanding partner.”
Hanlie, who works and lives in Stellenbosch, has always been involved in some kind of sport. As a young girl she jogged with her dad before school. “Sport has always been my island of sanity,” says Hanlie, who placed sixth in the Pick n Pay Cape Argus Cycle Tour in 2003 and then represented South Africa at the World Enduro Champs in Norway and the World Cross Country Champs in Italy in 2005.

TRAINING
She cycles three to four times a week and runs two to three times. She also fi ts in core and stability exercises twice a week, and does a bit of paddling in the summer months. As if that wasn’t enough,
she also walks her Jack Russell, Danielle, every day! “Sport is a way of getting rid of work-related stress, so I try not to place too much pressure on myself, unless there is something specifi c I am training
for, like the Cape Epic,” says Hanlie.

Cycling takes a lot of time – especially when training for such events – and this is where running complements Hanlie’s training regime. It allows her to still fi t in a quality training session, which helps with general fi tness, but without keeping her away from the offi ce for hours. She loves running, especially trail running, and often competes in duathlons or multi-sport
events. “Running is so basic and such an honest sport. You put your shoes on and off you go – any
time, any place.”

She runs any distance ranging from 8km to 40km, depending on her goal race. “Running helps my cycling, especially when I don’t have hours to spend on the bike. It also keeps my mind going when
I sometimes get a bit bored of bike, bike and more bike… and the rhythm of a good run often
helps me to sort out design problems in my job.”

ROAD TO SUCCESS
Hanlie believes that hard work and commitment have helped her become the successful athlete she
is today. “I am for sure not the most talented cyclist out there, but I am very committed and I
can sometimes become a bit too focused on my goals.” Her passion for cycling and sport in general comes from that feeling she gets when exercising outdoors. “It’s the mountains, the sea, the sun and
the wind. I feel close to my Creator when I train at special places, such as Jonkershoek here in Stellenbosch. When I’m out there it feels like my church.”

Running makes her feel free and light, and though she completed the Comrades Marathon and the Two Oceans Marathon twice each a few years ago, she won’t commit to such long distances again any time soon due to knee problems. She has great respect for the thousands of Comrades runners, as she knows how much it takes to fi nish the race. “I fi nd it inspirational to see how thousands of ordinary people cross the fi nish line. Comrades taught me how much harder you can push your body than what you thought was possible.”

Hanlie’s favourite race was the recent Southern Storm Duathlon. “We ran the hiking route of the Otter Trail (in the Tsitsikamma National Park) on the fi rst day of the fi ve-day, off-road duathlon. It was magnificent!”

Cycling and running help her to fi nd clarity on tough issues in hard times, and in good times they help her stay humble. “I can’t imagine my life without sport and I thank my Creator every day for the absolute privilege to participate. Winning is great, but even better is the ability to participate, just because of the sheer joy it gives you,” says Hanlie.

Her advice to young and aspiring cyclists is to fi nd a good coach and to remember that Rome was not built in one day – that it takes time to become a good cyclist. “Train and race hard, but never forget
where your talent comes from and that it can be taken away from you, especially when winning becomes more important than the joy you derive from sport.”