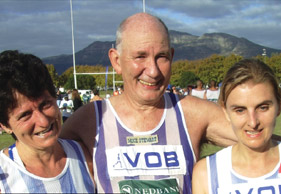 Cape Town’s biggest running club offers a great mix of well-organised and safe club runs that cater for every level of runner, and offer incredibly scenic races, fun monthly socials and a great mix of people. And all this happens in one of the most beautiful parts of the country, surrounded by Cape Town’s mountains, forests, vineyards and sea.

In 1977, a group of University of Cape Town graduates decided to start a new running club. After finishing their studies, they were no longer members of the UCT running club, so they decided to form their own, and the name they chose reflected their collective background – Varsity Old Boys, or VOB. The club colours they chose were the same royal blue and white colours of UCT, but instead of the horizontal stripes (hoops) that UCT uses, the new club opted for vertical stripes on the vest. This makes them one of the most distinctive clubs in the Cape – and not just because there are so many VOB runners to be seen at most races.

Today the club is officially known as acsis VOB, after the investment company that has been sponsoring the club since the beginning of 2009.

VOB has shared clubhouse facilities with the False Bay Rugby Club in Constantia since 1981, and regular activities at the clubhouse include at least six different club runs per week, catering for all levels of runner, as well as many socials. There are change rooms with shower facilities and all runners are invited to join the VOB members for a run and a post-run chat in the pub.

It’s an ideal setting for a running club, says club Chairman Richard McClarty. “The mountain and the vineyards are right on our doorstep and we’re in a sports complex with a Virgin Active gym on our grounds as well. It’s a great place to run – beautiful in summer, and in winter we can run in the suburbs where it is well lit.”

HAPPY CLUB
When asked what makes VOB a great club, Richard says that it is because, “We cater for all runners, from the elite to the slowest, and newcomers are always welcome. We really look after our new people – I made that my goal when I became Chairman. Your membership must be looked after, and there are all sorts of characters and personalities that need to be catered for.”

Richard attributes the success of the club to its loyal members. “We have a good base of stalwarts that have remained with VOB through the years. About 20 of the founder members still meet every Tuesday for a group run and then a bit of socialising in the clubhouse. Most people who leave do so only because of work transfers or going overseas. We’ve had very few issues over the years, and always try to work out any problems so nobody leaves unhappy. We care for our members and don’t like to see them leave.”

That’s not quite how it started, though. In the early years, VOB was more focused on elite and faster runners, but this led to a difference in opinion and a change of focus in the early 80s. When a large group of senior members broke away, the club lost its committee and its way for a short while, but a new committee was soon in place with a new attitude, namely, that it was more important to create a happy club, which catered to the average athlete rather than trying to make a name for the club by ‘buying’ elite athletes that had no long-term loyalty to the club.

In short, they wanted to create a club that people wanted to belong to. And it worked. “Today we’re the largest running club in the Western Province, with 733 members,” says Richard. “I think that makes us the second largest club in the country, with only RAC in Johannesburg bigger.”

CLUB RUNS
There are official VOB club runs most days of the week. Tuesdays and Thursdays are for group runs, Wednesdays see the running of the weekly time trial, the Jog Squad for beginners meets on Mondays and Wednesdays, and there are two Sunday running groups, plus a trail running group.

The Tuesday and Thursday group runs start at the clubhouse at 18:00, with various pacing groups led by experienced group leaders. The pace groups range from 4:15 to 6:15 min/km, and most groups train for about an hour, stopping for water along the way. There is also an informal group known as the “Five-Thirties” who start their run at 17:30 on Tuesdays. Every Tuesday evening, there’s also an interval training group for strength and speed, doing sessions that include 1000m, 400m and hill repeats.

On Sundays, the Cool Sunday Running Group meets at a different location each week for a long run at about 5:20 min/km, over varying distances. The Sunday Stars is the other weekend group, also meeting each week at a different location for a run of between 12km and 18km. This large group is aimed at both social and serious runners, catering for anything from 5:00 to 6:30 min/km. Each runner is encouraged to bring 1.5 litres of Coke with them, as there is a Coke stop every 3km.

Then there is the Trail Runners group, which makes the most of the pristine mountain and beach trails of Cape Town. Most runs feature longer or shorter, faster or slower routes and groups, so everybody is welcome, and it’s a very social group that sometimes has a post-run breakfast get-together.

The Jog Squad meets every Monday and Wednesday and has been going since 1984, helping countless non-runners become runners. New groups are started each year in January, May and September, and there are beginner, intermediate and advanced groups. The Jog Squad’s programmes have controls built into them to prevent runners from doing too much, too soon, and ending up with an injury.

VOB RACES
The club presents three races each year, all in the Constantia green belt area and on the slopes of Table Mountain, making them some of the most scenic and popular races in the province.

First on the calendar is the Constantia Village 15km in March, where one can “breathe in the grape-scented breeze” as the entry form states. Sponsored by the Constantia Village shopping centre, which is right next to the clubhouse, the race offers terrific prizes and giveaways from the tenants of the Village. This year, the race attracted a record field of over 1 800 finishers plus a further 200 in the 5km fun run.

Next up is the wonderfully scenic New Balance Table Mountain 16km in June, an absolute must-run for any mountain lover. Starting at the Constantia Nek parking area, the course winds up the bridle path to the back table of the mountain, then circles around the dams before flying back down to the Nek. The views of the southern Cape that you get along this route will simply blow you away, but dress warmly if the weather looks dodgy, because it can be hot down at the start and bitingly cold on top of the mountain. Unfortunately, due to the run being in a nature reserve, entries are limited to just 250, so preference is first given to all athletes who ran the previous year, before being opened up to the general public. All profits from the race are donated to the Table Mountain Parks Board.

The third race is the Constantia Valley Grape Run Half Marathon, presented by Sportsman’s Warehouse, in October. It runs through the historic wine farms of Groot Constantia, Klein Constantia and Buitenverwachting, as well as taking a turn through Tokai Forest, so it’s a tough, challenging course, but arguably the most beautiful in the Western Cape. This race has grown in popularity each year since the first running in 2004, so the club now has to cap entries at 1 500 to protect the farms and forest from being trampled. Both course records were broken this year, with men’s winner Sibusiso Mbingeleli running 1:09:19 and women’s winner Thozama April clocking in at 1:25:34. There were also a few famous faces in the pack, with multiple-Comrades Marathon winner Vladimir Kotov claiming the master men’s category win, and former Comrades runner-up Bob de la Motte also lining up during a visit to SA from Perth.

GIVING BACK
While the VOB clubhouse is located in Constantia and most of its members are residents of the more affluent areas of the southern suburbs, the club has also attracted many members from the more financially-disadvantaged sections of the community. Many of these athletes are young, enthusiastic and talented, and have been identified as being the nucleus that will make VOB an athletic force for many years to come.

For that reason, the club has established its Development Team, a satellite unit based in Khayelitsha with 23 members who often feature amongst the top places at local races. The runners are looked after by a dedicated team manager who also serves on the club committee. Furthermore, for the last ten or so years, the club has had a Chairman’s Fund, financed mainly by donations, which has been used to provide for the basic needs of financially-disadvantaged members.

SOCIAL SCENE
When asked about the club’s social scene, Richard’s eyes light up. “We’ve got the VOB Booze Box! It’s our tradition to have the club gazebo and Booze Box at big races, organised by the club captain. In years gone by, other clubs would come to us at races to buy drinks from us. We were a regular shebeen!”

The club’s socials are just as popular, with members from other clubs also joining regularly. These include the annual end of year Dinner Dance at the end of November, with this year’s theme being Arabian Nights, and the VOB Pub Run in early December.