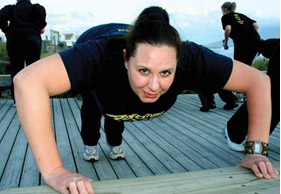 Most runners’ daily runs take the same routes. Most races are the same year after year and sometimes, the predictability of a route leaves you wanting something else. I have been running consistently since my winter hibernation period after Comrades, yet I felt something was missing. I have never been a gym bunny, so I knew a high-tech gym with its huge, claustrophobic walls was not the place to find the missing puzzle piece in my training schedule. I was in desperate need of a dose of some other cross training motivation. So, when I got the opportunity to be part of a four-week Adventure Boot Camp, I jumped at the chance to do something different.

GI JANE
At first, the thought of an exercise Boot Camp conjured up images of army clad GI Janes crawling through muddy water, climbing over walls and swinging from ropes, all the time being watched by a mean man with a thin moustache barking orders. When my friend, Denise Fox, told me about the Adventure Boot Camp she was attending at the Rietvlei Farm in Alberton, south of Johannesburg, I immediately wanted to know if it was an army style environment. “No ways, but just know, you are going to work hard,” said Denise, a tough cookie who has done 12 Comrades and often runs, teaches spinning and does Boot Camp – all in one day.

On my first evening as a Boot Camper, I had no idea what to expect. To be brutally honest, I had second thoughts about my new cross training project when the group of about 40 women started warming up by walking twenty steps and jogging another twenty steps. “How is this ever going to make me tired?” I (then) arrogantly thought. I was about to eat humble pie. As the days progressed, the classes became more challenging with endless squats, sit-ups, push-ups and sprints. After only two sessions, my muscles were so sore I found it difficult to get out of bed for my morning runs. Not even a marathon left me with such soreness, but at the same time I felt a feeling of satisfaction knowing that I was building a stronger body; which would probably help my running. Needless to say, after the first week, I was a loyal Boot camper.

Boot Camp is not about exhaustion to the point of no return; it’s about strengthening your body, building lean muscle and using muscles you forgot you ever had – and never strengthen while running. After week one, my soreness disappeared and my body started adapting to the new exercises.

Boot Camp does not require elaborate equipment. It has the same benefits as a gym (if not more) but it is more sociable and motivational. For me, the best part of Boot Camp was the natural environment one uses to make exercises more challenging; imagine exercising with peacocks and ducks surrounding you and looking up at the leaves of the trees as you cool down. Fields, walls, hills and steps are all used while exercising. For me, it was so much better than a gym!

Our energetic instructor and camp leader, Jason Coetzee, who is qualified in personal training, was full of energy and a great motivation, though he only likes hearing one answer and that is: “Yebo!” Jason’s favourite saying is, “Imagine strutting your stuff in December on Camps Bay. You will thank me.” One thing he is very good at is distracting you so that you don’t always realise how hard you are working. What I enjoyed most was being outdoors and seeing women of all shapes and sizes and with different goals give it their all, often displaying a sense of humour only a Boot Camper can have after what feels like the 60th ab crunch.

HOW DID THE BOOT CAMP CRAZE START?
Adventure Boot Camp was started in 2005 by Huenu Solsona. The four-week programme in a number of outdoor venues around the country, is a women-only thing and nothing like an army environment. It started with 30 enthusiastic women at Kirstenbosch Botanical Gardens in Cape Town and has grown to over 19 camps countrywide; all with a mission to create positive awareness in women both mentally and physically.

WHAT CAN YOU EXPECT?
You can choose between three sessions or five sessions a week. You don’t need trendy gym clothes and you’re not out there to impress anyone. Each boot camp session starts and ends with stretching. The hour of exercise involves a bit of everything and the challenges are upped every week, with the aim of leaving you feeling stronger and fitter after four weeks. You can expect to do squats, lunges, stomach crunches, skipping, running, obstacle courses, weight training and a lot of something I call triceps torture. It’s all focused on women’s needs. Exercises are designed to firm your butt and thighs, flatten your stomach, reduce body fat and increase stamina. These exercises hit the spot! You will tie ropes around your ankles and later use them to do arm exercises; expect to do these until you groan. Words like the Spiderman Plank and the Bear Crawl will soon become part of your vocabulary.

A pre- and post-evaluation on the first and last Friday of Boot Camp is done to help you monitor your progress. On assessment day, you do a timed sprint of 1.2km and as many sit ups and push ups as you can master in one minute. Each and every Boot Camper exercises to her own ability. There are women who can only walk, those who can only jog and those who sprint, some who can’t do any sit ups and some who would give GI Jane a run for her money. One thing is for sure; nobody is left behind or asked to complete more than they are capable of, but no one will go home unchallenged either.

I need to confess, my competitiveness did get the better of me and many times I tried to outrun everyone. Yes, it is easy to cheat and not do some of the exercises while your camp leader looks the other way, but at the end of the day you are only cheating yourself.

WHY DO BOOT CAMP?
You can expect a reduction in your body fat, some weight loss, improved posture, endurance improvement and an increase in strength. Just remember, none of these things will happen if you don’t adapt the rest of your lifestyle to a healthy one. Apart from this, Boot Camp is fun; you get to be outdoors and it’s motivating exercising in a group.

MY INITIAL DOUBTS ABOUT BOOT CAMP
I thought Boot Camp was just for women who are not fit and who have never exercised. I thought I was fit and strong. How wrong I was.

THE END RESULT
I loved doing something where I could push the limits again. I feel stronger and faster on my morning runs. In the past month, I have taken one minute off my 5km racing time. As with all new things, the question remains: has my running improved mainly because of Boot Camp or is it rather a case of running more consistently and feeling positive? I don’t know, maybe it’s a mix of everything. But one thing is for sure, Boot Camp was the most fun I have had exercising in a long time. It’s about sisterhood and team work and a great place to make friends. Maybe the adrenalin and my firmer thighs are clouding my sense of logic, but I am already considering signing up for the next camp.

HOW CAN CROSS TRAINING SUCH AS BOOT CAMP HELP IMPROVE YOUR RUNNING?
Boot Camp is a functional approach to fitness, says Jason Coetzee, personal trainer and Boot Camp leader at Rietvlei Farm. When you run, you are forced to hold your own body weight and at Boot Camp, you are using basic equipment and body weight during the work out. Because of this, the training is more specific to running. As runners, we tend to forget about the other components of fitness namely strength, conditioning and flexibility which are covered ex