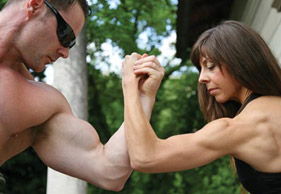 The subject of gender testing in sport is currently a hot topic and Modern Athlete asked an expert, Sports Physician Dr Gavin Shang, to give us some insight on the topic.

Caster Semenya is South Africa’s newest athletic sensation, having won gold in the 800m at the recent IAAF World Athletic Championships in Berlin. However, her remarkable achievements on the track have been overshadowed by questions surrounding her gender and possible physiological advantages she may have over her competitors. Many ‘informed’ politicians have advocated that she is indeed female and that a simple check for the ‘necessary parts’ would verify such statements. However, this is not as simple as it seems.

The questions and speculation from rival athletic bodies and competitors have only been fuelled by a released report, stating that her urine testosterone: epi-testosterone level was three times higher than normal for a female athlete. This is only one piece of information that may or may not be relevant once her entire case has been reviewed. Levels higher than 4:1 raise suspicion and further testing is then conducted.

The complex and in-depth analysis and evaluation process of gender verification or determination in sport requires a multidisciplinary approach involving geneticists, internal medicine specialists, gynaecologists, psychologists and endocrinologists; and even when a thorough investigation is complete, the answer is sometimes still in doubt.

This is not a new issue to the sporting community and has been brought up in the past when the eligibility of an athlete competing in an event, limited to a single gender, is questioned. This is usually only made relevant during elite international competitions. History shows us a number of occasions where male athletes have competed as females to win, or where natural inter-sex individuals have competed as females:

HISTORY OF GENDER VERIFICATION
Gender verification in sports was requested shortly after the 1936 Olympics, following performances by some questionable individuals. However, ‘proper’ tests only began in 1966 at the European Athletic Championships where many Eastern European and Soviet female athletes were suspected of being male. The tests were only mandatory for females and involved improper nude parades for assessment of their external characteristics. However, many conditions exist that allow for ambiguous genitalia to be present and is thus not the easy answer for determining the gender of a suspected athlete.

The next logical step would be chromosomal testing, which conventionally reveals an XX female or an XY male. However, many problems can arise during the many stages of foetal development, which can allow for a myriad of conditions to occur due to chromosomal, gonadal or hormonal influences. These varied intersex conditions present with the genetic sex differing from the external appearance of the individual and with varying physiological functions. Thus, XX males and XY females can exist with ambiguous external genitalia, which makes their classification as male or female more difficult.

Hormonally, testosterone is 10 to 20 times more abundant in males than in females; and is naturally produced by both the male testes and the female ovaries as well as by the adrenal glands.

The androgenic effects account for the primary and secondary sex characteristics in males. In females, testosterone effects are subtle and are responsible for musculo-skeletal development and libido. It is suggested in the literature that testosterone is important for memory, attention and spatial ability.

ILLEGAL DOPING
Illegal doping continues in sport, and athletes and laboratories go to exceptional lengths in attempts to conceal such abuse from regulatory bodies. The anabolic effects account for the lower body fat mass, increased muscle mass and strength and increased bone density, which allows those athletes to have a physiological advantage over their competitors. Excessive prolonged use can have masculinizing effects of facial hair growth, decreased breast size, menstrual irregularities, male pattern baldness and a deepened voice. One famous athlete who used testosterone for doping purposes and developed male characteristics was Heidi Kriegler, who later became Andreas Kriegler after retirement.

In 1996, Mary Decker-Slaney, world champion long-distance runner in the early 80s (infamously involved in a collision with South Africa’s Zola Budd at the 1984 Olympics in Los Angeles), had a urine testosterone:epi-testosterone level that was much higher than the 6:1 ratio allowed by the IAAF. She argued that females in their 30s and 40s on birth control medication could have higher than normal levels. The case eventually went to arbitration and still remains controversial.

Raised levels of testosterone can thus be due to many sources both exogenous and endogenous. Levels can vary widely amongst individuals and a higher than normal level does not always equate to a failed drug test. This makes possible infractions difficult to detect. If an athlete has raised levels, that individual is monitored at regular intervals to establish their normal levels and these are used as a marker for any future suspicious elevations.

Raised levels can be caused by doping or a number of disorders:

A SENSITIVE ISSUE
The process of gender testing has many variables and unfortunately in high profile cases, is played out in front of a world audience. It has been termed socially insensitive, humiliating and discriminatory towards females and individuals with disorders of sexual development. The far-reaching psychological consequences and social stigma for those who fail such tests are other issues all on their own. These are not new concerns; and much scrutiny and debate led to the IAAF ceasing compulsory gender testing on athletes in 1992, but it retained the option of assessing gender should suspicions arise or if challenged.

In 1996, IOC World Conference of Women and Health passed a resolution to discontinue the process of gender verification during the Olympics, and the IOC officially ended compulsory gender testing in 1999.

In the end there are no winners in this difficult matter, not to the sport or to the competitors and most importantly not to the individual at the centre of it all. Gender testing has a place in the sporting world to ensure fair competition for the athletes, but it should be handled more sensitively than it has been. All we can do is wait for the complicated process to be completed and for all the variables to be considered before jumping to conclusions.