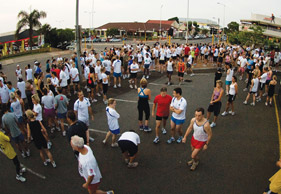 There are no club membership fees, no forms to fill in, no licence numbers or club kit, and you don’t have to be super-fast or muscular to join the biggest morning run in Durban North. There is only one thing you need to become a member of the Regent Harriers: a passion for running or walking.

Come rain, wind, hail or shine, they are there every Tuesday, Thursday and Friday, on the corner of Broadway and Kensington Drive in Durban North. Sometimes, up to 550 runners and walkers, of all shapes and sizes, from all walks of life, with different fitness levels and goals, gather in the early morning light to do the one thing that drives them and binds them together: their love of running.

Regent Harriers has become an institution in Durban, to such an extent that out-of-town runners who ran with them years ago still pitch up at the meeting place when on holiday or business in Durban – because they know that this incredible group will always be on that corner.

The members of this group have big hearts and are firm believers that there is always space for one more. Their welcoming spirit has caught many visiting runners off guard, such as Denise Fox, a runner from Alberton who recently went on holiday to Durban.

EVERYONE’S WELCOME
Denise heard about Regent Harriers from a local running friend. “When I got there, I phoned one of the guys, Bernie Karam, for directions. He was so friendly and even offered to pick me up, but I had my own car,” says Denise. When she got to the meeting place she was even more surprised. “I parked my car and the next minute, as if from nowhere, I saw hordes of people all over. It was like being at a race! I was amazed.”

She immediately felt welcome. “Everyone was friendly. One of the guys introduced me to a couple of runners and people started chatting to me. At exactly 5:10, a guy called the route and off we went. Some walked, some shuffled and some ran. I didn’t even have to fit into any group, there were so many people, I could just follow whoever was in front,” says Denise.

And don’t think everyone in the group is a long distance junkie training for Comrades. “Half of them don’t even run Comrades. The girl I ran with doesn’t run further than 21km and some other runners said they are only there to stay fit.”

Denise describes the run as a must-do when in Durban. “You will make new friends and experience something totally different,” says Denise, who also joined some members of the group for a 16km run on the Saturday of her stay.

A WAY OF LIFE
Regent Harriers was formed in 1960 by the late Ron Clokie. He trained with workmates Gordon McNair, Dave Russell and Ruben Turkington, meeting for early morning runs at Regent Place where he lived – and they took the name of the group from their meeting place. Over the years, the group grew to such an extent that the meeting place had to be moved 1km down the road to a more manageable venue on the corner of Broadway and Kensington.

The success of Regent Harriers, which celebrates its 50th birthday next year, lies in the group’s ability to bring people from different walks of life together, united by their passion for running or walking. “This passion levels everyone,” says Brett Florens, who shares the responsibility with Stephen Light of calling the route in the mornings.

When doing so, they have to take into consideration the amount of runners and try to avoid busy roads. “It has become such an incredible phenomenon. It is informal; you don’t have to worry about renewing licences or paying fees and you are free to come and go as you please,” says Brett.

The group has a high turnover of ‘members’, some training for events such as the Dusi Canoe Marathon or Iron Man, following which they usually relax and don’t join the group as often. Others are cyclists keeping fit when not cycling, but most are lifestyle athletes who just want to keep fit.

“Gone are the days of the 70s and 80s when people ran crazy distances. Priorities have changed. A lot of people just want to keep healthy,” says Brett. Everyone in the group has their own goals and their own reasons for being part of the morning run. “It’s an incredible support system to run with so many people. This morning someone complained about how hard the route was. Someone else immediately mentioned that one would never have done such a run on one’s own, but in a group you often push yourself beyond your limit.”

Another factor is that when running on your own, you often have no one to answer to except yourself, but when you’re in a group, your closer friends start questioning where you are if you don’t show up, says Brett.

SOMETHING FOR EVERYONE
A big advantage of the group is that inexperienced runners can gather a wealth of information from more experienced athletes, who are all too happy to share their knowledge.

“The group is so diverse, from elite athletes who have earned gold medals in the Comrades and Two Oceans marathons, to people weighing 120kg desperate to lose weight,” says Brett. Elite runners also join in, such as former Comrades winner Tilda Tearle and former Comrades gold medallist Carol Mercer.

Mondays are rest days. On Tuesdays and Fridays, the group runs 10km, but never the same route. “We are proud to say in all the years, we have never called the same route for consecutive runs,” says Brett. On Thursdays, it’s a fixed hilly route of 10km.

Those runners who want to add some distance to their training can also join on Wednesdays, Saturdays and Sundays, and these runs usually attract around 50 runners. These groups meet at different places, depending on the day:

CULTURAL DIFFERENCE
Many runners in the group belong to running clubs, but in Durban there is no culture of different clubs religiously meeting at their specific clubhouses every morning for training runs. “Durban is very different to Johannesburg! Our traffic is so much better and it takes most people less than 15 minutes to get to the morning runs. We only have time trials at our clubs in the evenings; no morning club runs,” says Brett.

The group also keeps growing thanks to the recruitment of new members on the runs. “When we see a lone runner, we invite him or her into our group. No pressure, though,” says Brett.

Since May this year, Regent Harriers has also had its own website. “We encourage each other on the site and runners who have emigrated post their details, inviting SA runners to join them for a run when overseas,” says Brett.

So next time you’re in Durban and thinking of an early morning run, get yourself to the corner of Broadway and Kensington Drive and experience something amazing!

FOR A GOOD CAUSE
Regent Harriers strongly believes in giving back to the community and has a trust that manages funds collected for a designated charity each year, culminating in the group’s charity run on 16 December.

“We have so-called ‘bag ladies’ who collect money a couple of weeks before 16 December. Runners are free to donate money or not. Some runners have donated R5 000! Their generosity is amazing, but there is no pressure to give anything,” says Brett.

Then, on 16 December, everyone runs with Christmas hats. Afterwards, those who prefer can stay and have some refreshments right there on the pavement of the ‘clubhouse’.

THE CHELSEA RUN
About two weeks before Comrades, the longer distance group has a Chelsea Run where the local supermarket donates Chelsea buns to the runners. “We eat Chelsea buns after the run and wish each other all the best for Comrades,” says Brett. And after the Big C, awards are handed to the first and last Comrades finishers from the Regent Harriers group.