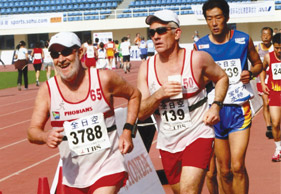 Name any South African city, Pretoria, Cape Town, Johannesburg, Durban, and many of us can claim to have finished numerous races there, received another medal and added the umpteenth t-shirt to our already overflowing collection. Been there done that, we sometimes boast. One thing not many of us can say is that we have run seven marathons on seven continents, experienced penguins sitting on our laps and allowed a big burly Russian to scrub our shoes on board a boat in the Antarctica. Modern Athlete spoke to Dimitri Kavallineas about his Seven Continents journey – and starting it all over again.

STARTING OUT
It started out with holidays in faraway places and ended in the southernmost part of the world. As a runner with ten Comrades and 12 Two Oceans Marathons under his belt, Dimitri and his long time buddy, Charles Stewart, are always looking for a race to run while on holiday. They happily refer to themselves as ‘running tourists’.

After finishing the Boston Marathon in North America, the Athens Classic Marathon in Europe and the Buenos Aires Marathon in South America, Dimitri, a self-confessed running addict, realised a marathon on each continent was within his reach, and that one day, he could belong to the elite Seven Continents Club. And so the pilgrimage started. Dimitri and Charles were off to Australia in 2006 to run the Sydney Marathon, followed by the Beijing International Marathon in Asia the following year. Six continents (including their African mother continent) had been conquered and they had just one left to complete the set.

MARATHON MEMORIES
Each marathon holds a special place in Dimitri and Charles’ hearts. It was the different stadiums and the historic routes that especially stood out. The Athens Classic Marathon finished in a stadium with marble seating, built in 1896 for the first Modern Olympics, while the Beijing Marathon finished in the same stadium where the Olympic Games were held last year. As two seasoned Comrades runners, they sometimes got less than what they bargained for, but sometimes they got a whole lot more.

Dimitri was especially surprised when he ran up the so-called ‘Heartbreak Hill’ in the Boston Marathon, without even realising it. When he saw his supporters next to the road, they immediately asked how he felt going up the much talked about hill. “What hill?” Dimitri asked. “We are so used to hills coming from Pretoria, that this route was as flat as a pancake. It was a great marathon, but there were too many people (about 35 000). It took us nearly 13 minutes to cross the start,” Dimitri says.

It was a whole different story at the Athens Classic Marathon, much to Dimitri’s dismay. He looked at the profile of the race on the internet and interpreted it wrongly, expecting a few hills in the first 10km, followed by a flattish latter part of the race. “We started running and we just kept on climbing. The downhills never came. I had to wait for 32km before seeing a downhill!” Their marathon journey took them to some famous landmarks. They ran over the Sydney Harbour Bridge and finished at the Sydney Opera House. In Beijing, the two comrades ran the same route as the Olympic Marathon last year. But it was the big mama of marathons that still lay ahead; the Antarctica Marathon, often referred to as the Last Marathon, because it is the last place on Earth one would think to hold a long distance race.

THE END OF THE EARTH
Antarctica is bigger than Europe and twelve times as big as South Africa. It’s colder than anywhere else on Earth. It is no wonder that the Antarctica Marathon is seen as one of the most extreme marathons in the world. This was a challenge Dimitri and Charles were fired up to take on. The waiting list for entries is about two years. Dimitri and a group of friends, including Tom Cottrell, author and publisher, had to plan things meticulously. They flew to Buenos Aires and took a flight to Ushuaia in the south of Argentina. From Ushuaia – 3 900km from the South Pole – they took a boat to Antarctica, a trip that took about six days. “There were two boats filled with runners and their companions. The organisers decided to split the group of South Africans, because the year before, the South Africans apparently drank the bar dry before they got to the Antarctica,” says Dimitri.

The Last Marathon is certainly no ordinary marathon and you won’t find big numbers on this desolate piece of land. Competitors in the half marathon and female competitors started a few minutes earlier than the men. This was done to minimise the race’s ecological impact on the pristine conditions in this remote part of the world.

The race, with a combined field of no more than about 200 runners, started at the Bellingshausen Station, a Russian scientific research station on King George Island, which is part of the South Shetland Island group. Dimitri and Charles, as always, started together. Though they were kitted out in hi-tech thermal running gear, there was clearly a difference between the South Africans and other international runners, Dimitri says. “We pitched up with our normal running shoes while the North Americans pulled out their yak tracks – a harness with little spikes you pull over your running shoes to stop you from slipping on ice and snow. They were clearly better prepared than us.”

Surprisingly, it wasn’t as cold at the start as they expected. At 9am it was just below zero degrees, feeling like a very cold Johannesburg morning. The route was marked out in a figure of eight, over an unforgiving terrain of glaciers and muddy snowy hills. Runners had to follow flags along the way and carry their own hydration packs as there were no manned water tables. Unlike South African road races, in which you see runners pulling in behind bushes for a much needed stop, competitors weren’t allowed to stop anywhere for a loo break. They had to go into one of the stations to use the toilet.

DETERMINATION
Charles, who has run nine Comrades, slipped about 6km into the race and hit his head. A doctor on the route had a look at him and diagnosed him with a concussion. He was a bit confused, but he would be fine. “The waiting list for this race is two years. It’s not like normal races where you can go back the next weekend and do another one. We decided to push through,” says Dimitri, but both men knew a battle lay ahead. It was already hard enough dealing with the terrain. Dimitri compares running on that terrain to running on an ice cube. Not an easy thing to expect from anyone, let alone a man with a concussion. Dimitri kept on asking his Phobians-running mate if he was okay, refusing to leave him behind. The course was marked out in miles and Charles, totally dazed, kept asking Dimitri where they were. “He couldn’t remember a single thing and I had to repeat everything. I must admit, it took my mind off things.”

As the day progressed, an icy wind and sleet set in, but the two men pushed through. They crossed the finish line in 6:39 and accomplished their goal; they were now members of the Seven Continents Club. Not that Charles had any recollection of what he had just achieved. “The next morning Charles was his old self. We joked and said he will have to go back and run it again because he can’t remember the race,” says Dimitri.

EXPERIENCE OF A LIFETIME
Dimitri describes Antarctica as a desolate place of incredible and strange beauty. “It’s an amazing continent. It feels as if you are on a different planet.” The men stayed for another couple of days, swimming in the icy Antarctic and getting to know the penguins on the different islands a bit better. “We were not allowed to approach the penguins, but if you sit still for long enough, they will approach you and even sit in your lap. It was such an experience.” Every time the men got back onto the boat, they had to put their feet in a trough with antiseptic water. “A big burly Russian grabs your legs and scrubs your shoes to make sure no one brings any germs onto the boat.”

NO STOPPING
For some it might be a once in a lifetime experience, but for 56-year-old Dimitri, the owner of a chain of pizza take-out restaurants, it’s only the start. He plans to run another seven marathons on seven continents. He has already completed a couple of South African marathons. He has run the Lake Tahoe Marathon in North America and will do the Toronto Marathon in Canada in October. “I would like to run some marathons in Nepal or Mongolia as well as in New Zealand.” He plans to be back in Antarctica by 2011, not a bad track record for a man who only started running at the age of 44 after giving up smoking. “The same day I stopped smoking, I started running, mainly because I did not want to gain weight. My first run was horrible, but I persevered and look at me today, I’m still running.”

Running has taught him determination and discipline in all aspects of life. He hardly skips his morning training runs with a group of friends, Elayne Ossip, Josene Groenewald, Linda Potgieter and Dawn Saunders. They run for an hour, increasing distance as they build up to marathons. Dimitri also has his heart set on completing the gruelling Iron Man next year, a race that’s anything but a walk in the park. But if he can finish 42.2km in the coldest, harshest and most remote part of the world, he can do anything.