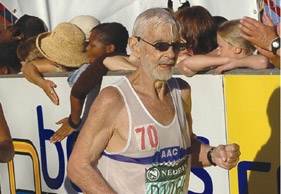 When you mention ’74-years-old’, most people would either think you were referring to a collectable antique or to somebody currently residing in a retirement home. Caspar Greeff has defied all the odds. At 74 years of age, he is still very much a regular on the running circuit.

Born in Cape Town in 1935, Caspar spent most of his weekends rambling around the mountains to keep fit until he was transferred to Johannesburg in 1966. To his disappointment, Jo’burg had more mine dumps than mountains and the affiliated clubs were more interested in actual mountain climbing than leisurely walks.

He realised he would have to find a new way to exercise and since road-walking had become very popular at that time, he thought he would give it a try, getting his family involved at the same time. “My family and I participated and enjoyed the walks, although we were not very good. I took part in a few 50km walks, which I enjoyed. In 1969, once he had mastered the 50km walks, he thought he would push himself a little further and try the Comrades. “I ran my first road race that year which was the 56km Korkie. My second race was the Comrades. Those days, there was no qualifying race necessary.”

To put Caspar’s humble quote into perspective, one would have to understand the jump that Caspar made. He went from enjoying long walks to running his first Comrades at the age of 34, with no previous training, and finished in a time of 07:38:25. He went on to run nine silvers in a row between 1969 and 1978. He obviously had some hidden natural talent!

One of the athletes who made a huge impression on Caspar in his early days was Fritz Madel, who won five Comrades golds between 1959 and 1966 and won the London to Brighton marathon. Fritz believed that to run ultra-marathons, you needed to train over exceptionally long distances. “His methods worked for me and for the bunch of running friends with whom I trained. We all trained over long distances and most of us got silver medals in the Comrades.”

For those of you who have run Comrades, you will be able to appreciate the times that Caspar has achieved over the last 15 years. This is a great example of the leveller this great sport of ours is. You are on the road, with both young and old, rich and poor, and only you can define the results you achieve.

Mr Greeff has an impressive resum? for a man who only began his running career in his mid-30s. “I have lost count of the number of standard marathons that I have completed, but it is probably well over 200, with a best time of 2:38.” His ultra-marathon list includes, amongst others, 36 Comrades, 11 Karoo Marathons (80km), three 100-milers, two 100km races, two London to Brighton Marathons (90km), six Settlers Marathons (64km), 17 Korkie Marathons (56km) and two Rhodes Marathons (52km). He also has a green number in both the City to City (50km) and Bergville Marathons (52km) and has completed 24 Two Oceans Marathons. Caspar also had the opportunity to run a race in Perth, Australia. He ran a 64km ultra and made a discovery about the quality of ultra races on an international level. “I arrived at the race to be told that there were no seconding tables. The organisers arranged for me to be helped by someone else’s seconds, so I could finish the race. I realised then how lucky we are to have such well-organised races in South Africa.”

With so many miles on the road, Caspar has a lot of fond memories. He tells a unique story about running in Hush Puppies, not your typical running brand. “I have run about six Beaufort West ultras. One year when I arrived in Beaufort West, I discovered that I had left my running shoes in Johannesburg. I ran the race in my Hush Puppies, which fortunately had level soles, and finished in a time that was not much slower than my previous year’s time.”

Caspar’s daughter, Michele Murry, said of him: “I am grateful for the time I have spent running with him, as we have shared many special moments together. He has always made running seem so easy.”

Caspar is one of the three founding members of RAC. He was a professor of actuarial science and an actuary.

Caspar Greeff is a true vintage model. He is an inspiration to all runners and living proof that the sport can keep you healthy and fit, well into your twilight years. We’re inspired by his incredible story and we wish Caspar many more years of enjoyment on the road.