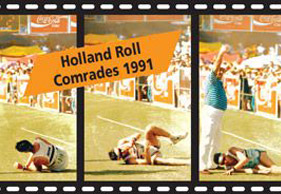 Mention the word Comrades and the club Jeppe in one sentence and most runners will ask you if you know Barry Holland. The man is an icon when it comes to the Comrades Marathon and rightfully so, as he has run 36 consecutive Comrades Marathons.

That’s right. It is as incredible as it sounds.
I met Barry at Doppio Zero in Bedfordview to discuss how he has managed to achieve this amazing feat. At an age (57) where most people are starting to consider retirement, Barry has the strength and character of a young man just starting out in life. When considering the silver, Barry gets a spring in his already large stride.

I have recently had the privilege of running several training runs with Barry and can confirm that he is one of the most approachable runners on the road. Nothing is too small for the big man. He openly shares his experiences and gives advice that has the potential to change many people’s running lives. I sat down for a coffee and prepared to find out more about Barry.

How old were you and what influenced you to start running?
I first decided to run Comrades at 18 but got bored with all the training, so I didn’t do my first one until I was 20. As a Durban boy, you are destined to run Comrades. It’s in your DNA. I started running with Regent Harriers. It was not an official club; just a famous group of people that ran from Regent Place in Durban.

Did you ever dream you would go on to run 36 consecutive races and what has kept you coming back?
No, I never thought I would. I just loved it so much that it became a way of life. The training and  camaraderie have been the biggest factors. The Comrades is actually a pain on the day but getting there is great. I became a victim of having done a down run, then being challenged to do the up. Then, I went on to get five. Before I knew it, I was chasing my green number at ten and so it went on!

This year is your 37th. How has your training been and what time are you aiming for?
Training has gone exceptionally well this year, better than the last few. I will run under eight hours.

How many more do you think you have left in you?
Difficult question. I am definitely going to do 40; that’s a given. I will go to 42 so I can run my wife’s 20th with her. From there, it’s up to the big man upstairs.

Could you imagine ever watching Comrades on TV?
No, I was running Comrades before TV came out, so I have never watched the race and I have no desire to watch it.

What is your most memorable Comrades and which would you like to forget?
Phew, that’s quite hard. A bunch stick out. Must be my 6:29:22 in 1991. It was as fast and as far as I could go in my talent limit and I achieved what I could do with the talent I have. Most memorable is also the famous Holland roll, when I fell over. It was captured in a series of photos of me getting over the line and trying to stop my watch as the officials signalled for the medics. It made the front page of most newspapers around the country. In terms of a horrible run, my last attempt at a silver in 2007 sticks out. It was the realisation that in all likelihood, the days of running a silver were potentially over for me. But never say ‘never’. I am getting a bit madala now and it’s getting harder, but who knows?

Any special medals?
I was the first guy at Jeppe to get ten silvers, which are all framed. The rest are scattered all over the place.

Are you racing the clock or the course?
Both. Only the top ten race just the clock. The rest is you against the course and the clock combined. You’re always fighting the course but you should set yourself a time goal. It is always your personal achievement you’re chasing.

You’re not built like a traditional ultra-distance runner. At 6ft3 with a strong frame, how have you managed to stay healthy and get to the start line every year?
A couple of factors contribute to it, like genetic luck. You can’t choose your parents; you get given the genes you get. I think I am biomechanically sound, which is just luck. I also take a good rest after Comrades every year. Most runners come back too soon. Comrades is exceptionally damaging, especially the down run. I throw my takkies in the cupboard for two months after each race. Also, I have always been a very sensible runner. Every time I have been injured, I can relate it back to a specific incident of stupidity and have learned to avoid these errors over the years.

Have you ever had a bad injury and thought you might not make it to the start line?
One year I picked up a calf injury in January at the Johnson Crane 21. It was caused by not warming up and starting too fast with Bradley. I tore my calf. Linda Oliver (physio) treated me and told me to take three weeks off, which is very hard in the peak of Comrades training, but I was sensible and listened and made it to the start. Listening to professionals and your body is key!

You have 22 silvers. This means performing at the highest level for over three decades. At 57, do you think there are more silvers out there for you?
My first silver was in my fourth Comrades and I got the last one about five years ago. If I am honest, the answer is no, but I never say never. With the bunch of guys I run with at Jeppe, I’m always being pushed and challenged, so let’s see.

You must have met some real characters on the road in your training and racing days. Who sticks out and why?
Malcolm Marsh; he was such a tough runner from the mounted police in Rhodesia. I ran Two Oceans with him where he ran his PB for 21km, 32km, the marathon and Oceans all on the same day. I didn’t think he could do it, as the Oceans silver is so tough. It’s a real man’s silver. Theo Jackson was the ultimate character. He was the founder of Jeppe and a very close personal friend. He made sarcasm an art form. He was one of the funniest guys you could ever meet, with a super sharp brain and was very quick to give nicknames to everybody. My nickname was Long Street, the blind detective in an old TV series. I am blind in one eye, so Theo was quick to christen me. I enjoyed racing Clive Gilman, an incredibly talented athlete. He was a Trident (rowing Springbok). We ran silver at Oceans together, Comrades together and sub 2:50 marathons together. He had the most fantastic style I have ever seen on a runner. He taught me a great lesson – learn to give your pressure and pain away to the crowd. This helped me through many bad patches on the roads over the years.

How many kilometres do you train in an average preparation for Comrades?
Roundabout 2 000km from January to race day, plus another 1 000 in the off-season.

This means you have run over 110 000km over the last 37 years, all without a major service!
I reckon I have completed my fourth trip around the world. The circumference of the world is only 25 000km.

This year is a down run. What are the key sectors of the race for you?
Comrades is fascinating, because down and up are so different. On the down run, the first half is very forgiving. The hardest section is from the back of Inchanga to Hillcrest; from Hillcrest to Pinetown is the most amazing racing country. If you have it in your legs, this is the section you’re going to run your time. It’s all downhill. On the down run, Comrades starts in Pinetown. It’s 70km of warm up and 20km of racing. You have very tired legs at this point and it’s a matter of survival. It’s very sore from Pinetown home.

What do you enjoy most about running these days?
The stuff in the mornings. It’s great. I really love helping guys. I enjoy writing the programmes, keeping guys motivated and improving. I love it. I tried to retire one day after 32 Comrades. I said, that’s it, had a big ‘snot en trane’ session and got a great 3 litre bottle of Meerlust wine from my club. When it got to the 11th hour, I couldn’t do it. I just didn’t know what to do with myself. I got irritable. Comrades was just too much a part of my life. I have never opened the wine but reckon I deserve it after my 40th.

You have a wealth of experience. Any words of advice for somebody considering taking up the sport and wanting to run their fi rst Comrades?
Come and run at Jeppe.

Any races you still want to run?
I would love to run Boston. I’ve never been there so it’s still a box that needs to be ticked.

Barry Holland certainly is on a roll; long may it last.