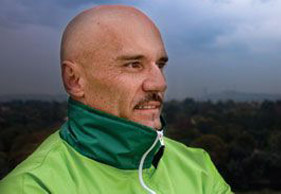 John Hamlett is one of the country’s top running coaches. He has received numerous accolades as a runner and even more as a coach. Paul was lucky enough to catch up with John to find out more about the man.

John greets me with a warm smile and a face filled with sincerity. We take our seats at the local  Weisenhoff and John kicks off with genuine modesty, “Why do you want to do a story on me? There must be hundreds of interesting runners!” I assure him that there are thousands of aspiring athletes, both social and professional, who would value his opinion and advice; he does not disappoint. He recalls many great stories with passion and gusto, stories of personal competitions and training others.

While this ex-military man discusses preparation and strategy with the seriousness of an army general, he talks of the joy of winning and the success of his athletes with the vigour of a proud father.
Over the last 33 years, John has lived the sport with the na?ve ambition of a 15-year old, enjoying the negotiations and steely preparation required for the modern business that is road running.

FIRST MEMORY…
John rubs his hands together and reminisces about his youth. “As a ‘lighty’, I played every sport at school. You name it, I tried it. When I was 15, I came home and told my dad that I wanted to run a marathon”.
John’s dad rolled his eyes and thought ‘here we go again’.

He questioned John’s commitment to running, as he tended to skip from one sporting phase to another. John’s father explained the seriousness of road running and the sacrifices required, but John was  adamant – he wanted to run.

His dad struck a deal with him. He drove him just over 42km from their house, claiming that if John made it home in less than four hours, he would go and buy the equipment necessary for John to participate in marathon running. Totally unaware of the preparation required, John loaded up on oranges and orange juice prior to the run (because that’s what they gave him at football, so he assumed it was what was best for him).

“There I was in Bapsfontein, way too many oranges in my system, cheap tennis takkies, my football shorts and PE vest. Needless to say, I failed hopelessly.” He was “moeg, finished and my feet had the worst blisters”, but he managed to convince his dad to give him another chance.

Four days later, John re-ran the 42km distance in under four hours. His father was now convinced that John had the potential to be a good runner. Two weeks later, they were off to do the Pietersburg Marathon.

“I was buzzing. Surrounded by experienced runners I felt really out of place in my tennis takkies, but I was listening and learning from these guys!” enthuses John. That Saturday morning, John was prepared with the right fluids (Coca Cola and water) and the right shoes (Puma trainers his father had bought him the day before). John continues, “I finished 8th, 3:04 and as they say the rest is history!”

LIVE THE DREAM…
As a coach, John stresses the many attributes that contribute towards being a successful runner, such as discipline, determination, commitment and talent. However, he likes his athletes to start with a dream.

“You need a goal! I like my athletes to get carried away, put themselves out there and say what they want to achieve, where they want their running to take them. Once they can visualize their goals, we work backwards from there!” When asked to list his top fi ve athletes, John grins, “You’re going to get me in trouble here! I am incredibly proud of all of my athletes but there are those who stand out because of their achievements and those who have exceeded their limitations.”

BEATING THE RUSSIANS
John admits to having a resentful respect for the Russian athletes, as they have become the men to beat on the local marathon circuit. “They are professional, committed and good athletes!” stresses John. “For many years they were merely ‘the Russians’ to me, these foreigners that we had to beat on the road.” John’s opinion changed following a trip to Russia in 2003 as a guest of Dimitri Grishen. The trip left him with insight into the life of the Russian athletes, their social backgrounds, their ethics and their moral make-up. John describes a visit to a town in Russia called Schusdal, a training camp where the athletes would fish for their dinner through a hole in the ice on a frozen river. The town had no electricity. They were invited to a dinner at an acquaintance of Dimitri’s, at a solitary log cabin in the middle of nowhere. “This guy had laid out the biggest spread for us, meat, veggies, bread and drink. We were ready for a huge feast, but before we started, Dimitri called me to one side and asked that we not eat all the food on offer. I asked him why; I thought we would insult the man if we didn’t eat everything. Dimitri explained to me that this food was all that the guy had for the winter and that if we ate it all, he would die of starvation as the closest town was over 140km away! He was prepared to do that for us – he was going to risk starvation for us!”
About a week later, the South African contingent went to a training complex where several promising Russian athletes were training. There was an outside track covered in snow, but a solitary athlete had cleared a path and was running on the track. John asked why the man was not running inside and was told that the athlete had chosen to run outside, as he was determined to win an Olympic track gold. John asked what the athlete would do if he did not win a gold medal, which earned him a look of piercing disdain from the coach. Not achieving gold was not an option. As it turned out, the man took an 800m gold medal at the 2004 Olympics. This story illustrates the Russian commitment to success and their determination to achieve their dreams!

But this is true of South African sportspeople too. First place is everything, as John explains in his recollection of the 2001 Comrades Marathon. “The elation and hype surrounding Andrew’s Comrades win in 2001 was insane.  The patriotism, the joy and the celebrity lifestyle that he endured were incredible. We could not go anywhere in KwaZulu Natal without being surrounded by fans within minutes.”

He recalls the fi nal few kilometres of the 2001 Comrades with the passion of a Springbok fan revisiting the ’95 drop goal and tells how he cringed when a traffi c offi cer told Andrew that the ‘Russian’ was catching him. “That cop nearly ruined my entire strategy. The wrong advice at that stage could have seen Andrew crumble or push too soon. Fortunately, he looked back at me and I tapped my watch; that was my sign to let him know that the race was in the bag and that he should push for the record. That gave Andrew the confidence to stick to his rhythm and even up the tempo.”

John describes his experience towards the end of the race and the feeling of euphoria that ran through the crowd. “I ran into the stadium trying to get to the finish line in time to meet Andrew. As he entered the stadium and the word spread that a South African was going to win, the place erupted! It was impossible to get through! I saw old men crying with pride; it was awesome!” continues John. “After the race, Andrew wanted to get away from the crowds. We went to a quiet beach on the north coast, but within 15 minutes we were swamped; we couldn’t go anywhere! That night back at the hotel, Andrew said he had been waiting for this moment. He reminded me of an instruction I had given him years before – the night after a successful race: go and lie in a bath, close your eyes and say, “This is my day!” Have confidence that you have done your best and beaten the others fair and square – a moment between you and your God.”

WHO DOES JOHN THINK WILL WIN THIS YEAR’S COMRADES?
Leonid, who is running in our team this year (Nedbank), without a doubt. Last year he ran the perfect race.