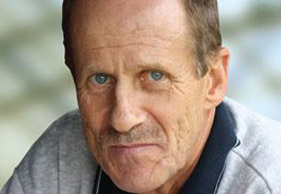 Say the name ‘Alan Robb’ to anyone in road running circles and the response will undoubtedly be one of the utmost respect and awe. 99% of responses will be a resounding, “the guy is a legend!”

Modern Athlete took this Living Legend to lunch recently, not only to find out what he is up to now but also to get him to tell us some of the secrets from his incredible 38-year career that could give modern athletes an advantage.

Alan is remarkably unassuming, a quiet man whose passion for participation shouts the loudest. Currently, he is running and preparing for yet another Comrades, his 36th. With the addition of both canoeing and mountain biking, it is clear that this man simply loves a challenge and has a built-in determination to conquer courses regardless of their landscape.
Over the period of his career, Alan beat many records and set many others, achieving several personal goals. With the mileage on his clock, he probably wouldn’t qualify for finance if he were a vehicle, but would fall under the vintage category as a genuine classic.

Once he has ordered his calamari, this Rocky’s veteran sits back and, with very little encouragement, takes me through his career. He is after all the leading gold medallist at the Comrades Marathon with a total of 12, something anyone would want to talk about. The incredible thing about this achievement is that he won the medals over a span of 17 years, the first in 1974 and last in 1991.

The highlight for him was winning the 1978 Comrades. “I was the first guy to crack 5:30. It was a great feeling. Back then, the Comrades was the pinnacle for road runners; it really was the Holy Grail in which every long-distance road runner aspired to be successful. There was a healthy rivalry!”

So who does this master claim is his biggest challenger throughout his career? “To be honest, I mainly raced myself and the course. There were many battles on the way, but most notably I would have to say Bruce (Fordyce). He was just starting as I was winding down, so we didn’t compete as often as I would have liked. The ’82 Comrades against Bruce was a good race!” remembers Alan. It is interesting to note that there is one record Alan will always hold over Bruce, as they are both now in the twilight of their careers. Fordyce is one short in the gold medal race; he has 11.

It seems as though personal pride was the pay packet back ‘in the day’. Even though you couldn’t pay your bond with it, it sure was a big motivator. Is Alan resentful that his generation seemed to miss out on the money associated with modern road running? “Not at all”, he stresses, however he is quick to mention that, “The guy who finished second in Two Oceans got R75K. In 1976, I finished second and I got a tog bag!” Alan’s big cash payday was R300 for a local marathon. For interest’s sake, we did the comparison of what Alan would have won in today’s prize pool for his 12 Top Ten finishes at  Comrades. It looks like Mr Robb would have earned some change and then some!

Moving away from the topic of Comrades, I found out a little bit about the man behind the red socks. Everyone knows about Alan’s famous red socks, but where did they come from? Well, he was in a hurry to get to a race one day and couldn’t find any white socks, so he raided his dad’s drawer and came up with a red pair. His mates chirped him on the road that day and in true Robb style, he decided to keep wearing them.

His passion for sport shone through from when he was young. He attended Highlands North High School and was predominantly a swimmer. He only really began to show an interest in running in the army and ended up running for the defence force. His first competitive race was in January 1974. It was a 32km from the Johannesburg City Hall to Krugersdorp and, maybe not surprisingly, he won it in a course record time of 1:49.

On the family side, Alan’s wife Merle, his pillar of support, has been with him for 30 years. He has also made many good friends on the road over the years and speaks fondly of Danie Oosthuizen and Charlie Chase from his days at Germiston Callies. Ken Kerr, Dave Pritchard and regular weekend running partner Pete Hurry are amongst those who have left an impression.

When questioned whether he has a race plan, he casually replies, “Not really. I’ll just go out to win and run my own race. Once you are the favourite for a race, most other runners sit with you to see what you are going to do, which allows you to then control the pace.” His favourite race was the old Milo Korkie from Pretoria to Johannesburg, which he won five times, breaking the record. He refers to the race as ’slow poison‘ indicating to us that this man can take pain better than most!

There are very few athletes with his longevity, experience and success in the sport, so we asked him if there is anything that he knows today that he would have liked to know 38 years ago. His answer is an emphatic, “No, just go out and run, speak to a lot of people and get different ideas; try them and see what suits you best.”

In Alan’s opinion, the sport has not changed much over the years. “Well, maybe the training has changed, but let’s be honest, man has been running for centuries. It’s not that complex. The way I see it is that besides the leading groups, the times are actually getting slower and the average age of the leading groups is older,” explains Alan. “At the Old Eds 8km time trial in my day, the top 20 all ran under 27 minutes. Today, most top 20 times are just under 30 minutes. It is a great sport and should not be messed with too much, from the professionals to the novices. There is a great atmosphere on the road and once the bug bites, you can never leave it!”

On nutrition, Alan says he enjoys a good steak, egg and chips before a race. “In the early days, there were no additional supplements on the road. You had Coke and water and you ran!” He didn’t really have much of a recovery period after the Comrades either. He would move straight into the cross-country season, 12km events from May to August with the Callies team and then back on the road by 4 September for the annual Gold Reef Marathon from Johannesburg to Brakpan. Alan would do three to four quality sessions a week, which included track speed work, hill repeats at the Top Star drive-in and regular time trials. He would then add a 25km run on Saturdays and anywhere between 30km to 70km on a Sunday. These days, he says there are only regular 12km runs around the country club.

Like most South African sportsmen of his generation, his biggest regret is not having had the opportunity to compete at an international level more often. He remembers running on the ‘wrong side of the road’ in UK events, most notably the London to Brighton. “We had some great runners back then and could have cleaned up overseas,” laments Alan. These experiences, however, have not dampened the joy with which he looks back at his years of running. “I have been extremely fortunate. I have been fairly good at something I love and while I have had injuries, there has been nothing that has kept me out of action for too long. I have enjoyed the experience and made a lot of friends on the road. I have had a career-long sponsorship from ASICS – those guys were and still are fantastic towards me!”

A good runner needs good-quality equipment and Alan swears by his ASICS trainers. “They are making some great footwear and they tailor-make shoes for any kind of runner. Despite all the advances of technology, I fondly remember my old ‘Tigers’ as a 25-year old. They were the perfect shoes, uncomplicated and comfortable!”

So what does the future hold for a man with Alan Robb’s record? What is there left to achieve? In my opinion, with 35 Comrades runs and well over 300 000km on the clock, he could be forgiven for wanting to hang up his takkies and call it a day. But Alan is aiming for silver number 18 at Comrades this year. He has bet a friend that he can still run silver. He reckons it’s touch-and-go at the moment. One thing is for sure, he will give it his best shot! He recently put himself to the test over 8km. He says it’s been about 15 years since he last did a time trial, and though his time of 33:45 is a far cry from his PB of 24:15, it’s not bad for a 55-year old (even though he mentions he had spit, snot and sweat coming out of everywhere). “I will continue to take it one year at a time and see how I feel; there are no plans to stop running. If I can stay injury free, I would like to do 40 Comrades.”