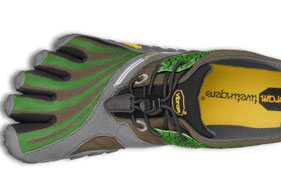 The new shoe is
named after Spyridon Louis, the Greek shepherd who won the marathon in the first
modern Olympics in 1896 in Athens, run mostly on gravel roads and basic trails.
Like the Olympic champion, these shoes are built for the rough, with the most
aggressive tread yet seen on a Vibram FiveFingers model.

The shoe comes in two versions, the Spyridon and
Spyridon LS, with identical outsoles, but the LS upper has a quick-fit
speed-lacing system instead of a Velcro strap fastener, and the upper is
thicker, with leather overlays that provide a bit more structure to the fit. I
tested the LS, and found that it provides the same ‘barefoot’ minimalist feel
of other FiveFingers models, thus also promoting forefoot running, but the
lugged outsole gripped the gravel roads and trails much better than the road
models I previously tested. The square-shaped cleats are raised in different directions
to provide traction on loose surfaces, and I found they really stuck!

More importantly for me, with my admittedly baby-soft
feet, was the support provided by the moulded nylon mesh ‘rock block’ insert in
the arch. I stood on a few tree roots and stones during my run, and while I
still felt them, I came out of it in much better shape than I thought I would, without
the flexibility of the shoe being reduced.

In past
tests, I found it hard to get my feet into the versions with a one-piece
stretch upper, because the tops of my feet are slightly raised, so I had to opt
for a laced version that I could open up a bit. The Spyridon, being a trail
shoe, also has a one-piece upper to keep grit out, but I could still get my
feet in fairly easily thanks to the speed-lace fastener that allowed just
enough play. Even better, when I put on a pair of Injinji toe-socks – with the
same five-toe design as the Vibram shoes – my feet just glided into the shoes,
and I really enjoyed the smoother ride, given that my feet are not used to
running without socks.

Available
from leading retailers nationwide – check out the store locator on
www.vibramfivefingers.co.za. Recommended selling prices: R1499 for the
Spyridon, R1599 for the Spyridon LS. Men’s and women’s sizes available. Injinji
Socks range from R99 – R180 depending on the style.